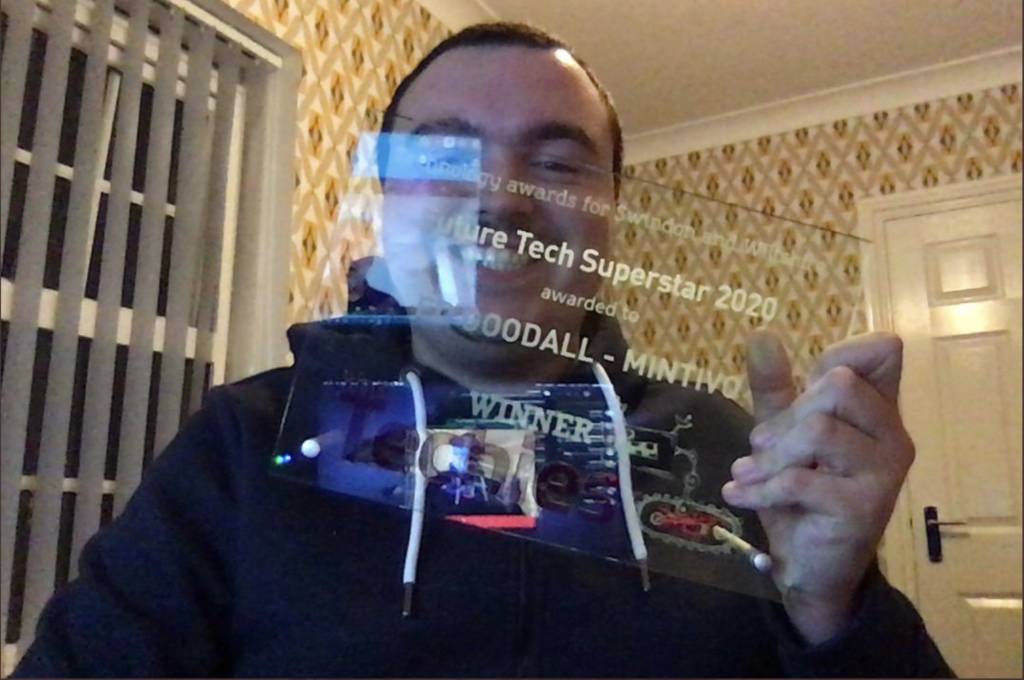 On the first night of Lockdown 2.0, The Business Exchange hosted The Techies Awards 2020, celebrating the best in Swindon and Wiltshire tech.

Supported by the Swindon & Wiltshire Local Enterprise Partnership as headline sponsor, the Techies puts the spotlight on our area’s most innovative businesses and showcases our region’s talent.

Despite the national mood, the Techies raised spirits with well over 100 people participating in the awards online. The awards were broadcast live on Zoom, with judges and sponsors presenting awards from their homes.

To make the event more interactive, attendees received ‘Techies Tuck Packs’ ahead of the night, packed full of goodies from Wiltshire producers. The crowd also received a Techies awards playlist to get them in the mood and watched a cocktail demo from Hugh Anderson at Downton Distillery on how to make the perfect celebratory drink. During the interval there was a turntablist set from DJ Asian Hawk and everyone tucked in to a chocolate fondant, delivered to their doorstep by Fluffy Puffin.

The competition was fierce this year and all finalists should be proud of their achievements. We are delighted to announce the winners in each category.

Flying the Flag for Swindon & Wiltshire Tech – Sponsored by SETsquared

Tech Team of the Year – Sponsored by Thrings

Cutting IT Award – Sponsored by All Boxed

Techies judge, James Eades, Managing Director, Systemagic, said, “In a year where technology has played a huge role in keeping the economy, and life in general, moving, it has been fantastic to read so many strong awards entries from Wiltshire’s finest digital and technology companies. Wiltshire continues to produce innovative, clever and lucrative tech, creating jobs and raising the profile of our county. The Techies gives a voice to this sector and it has been a privileged to once again be involved in the process.”

Further coverage of the awards will follow including more photos, a video and a Techies Special in the December/January edition of The Business Exchange Swindon & Wiltshire magazine.

Congratulations to all of the winners and finalists. Follow the conversation on social media #TheWiltshire Techies.

A big thanks to all of our sponsors for making the night possible and such a success.